Kaiserschmarrn (Emperor’s Mess) is a specialty pancake, lightly sweetened with sugar and served with jam. The name of this dessert comes from the Austrian emperor Franz Joseph, who was very fond of this kind of fluffy shredded pancake.

The Austro-Hungarian Compromise of 1867 created the Dual Monarchy of Austria-Hungary. It lasted until the end of the 1st world war. That time Franz Joseph was the emperor of Austria (1848–1916) and the king of Hungary (1867–1916).

According to the legend the emperor and his wife were traveling the Alps and stopped by a farmer’s home for lunch. The farmer was so nervous that he threw all the fanciest ingredients he had into a pan to make a delicious pancake; worse yet, due to his nervousness and shaky hands he scrambled the pancake. Hoping to cover up the mess he then covered it with jam. Luckily, the Kaiser thought it was just delicious.

This dessert was a popular dish of the Habsburg monarchy, which over the years spread into not just the Austrian, but the Bavarian, Slovenian and Hungarian households as well.
Source: Wikipedia

How to make Hungarian császármorzsa (Kaiserschmarrn)?

The Hungarian name of Kaiserschmarrn is Császármorzsa, or better known as „smarni”and can be prepared in different ways. The basic ingredients are sugar, flour, eggs, milk and salt. in Hungary we often add semolina as well, however I prefer making it without semolina. Also, many recipe calls for raisins and rum, which I skipped this time because I do not like raisins in desserts. The recipe below is written with the raisins and rum.

What makes this pancake so fluffy? We separate the egg yolk from the white and beat the white until stiff peaks form, then gently fold it into the batter. Baking powder is NOT added to it.

The pan you use makes a big difference in how the Császármorzsa will fry and how easily you will be able to flip it. You must use a non-stick pan for best results.

Császármorzsa is broken up into smaller pieces with a spatula or wooden spoon while frying. It is done in 15 minutes, serve it with your favorite jam. 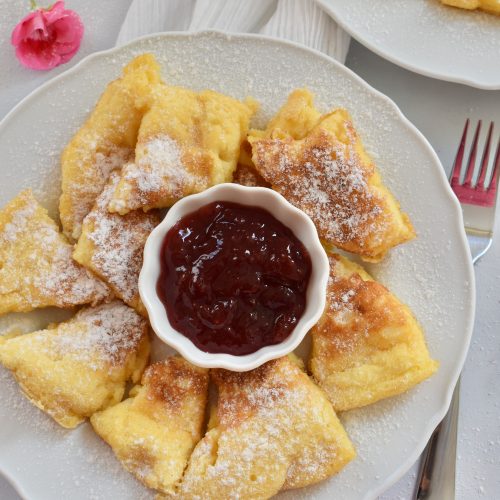 The Hungarian name of Kaiserschmarrn  is Császármorzsa, or better known as „smarni”and can be prepared in different ways. It is a specialty pancake, lightly sweetened with sugar and served with jam.
5 from 2 votes
Print Recipe Pin Recipe
Total Time 15 mins
Course Dessert
Cuisine Austrian, Hungarian
Servings 4 people