Strudel is a type of layered pastry with a filling that is usually sweet, but savory fillings are also very popular in Hungary, my favorite is the cabbage strudel. Strudel became popular during the Austro-Hungarian Empire, however, the oldest known strudel recipe is from 1697. Strudel is part of Austrian cuisine but is also common in other Central European cuisines as well, and it one of the most beloved traditional pastries among Hungarians, walnut strudel is favorite filling.

Walnut strudel is one of the easiest dessert recipes, it makes for a great autumn dessert but you can serve it any time of the year.

How to make strudel?

The traditional strudel pastry dough is very elastic. It is made from flour with a high gluten content, water, lard, vinegar, salt and egg, with no sugar added. The dough is worked vigorously, rested, and then rolled out and stretched by hand very thinly. Purists say that it should be so thin that you can read a newspaper through it. Making strudel from scratch requires special knowledge, practice and patience. It is time consuming so now I am sharing the recipe which uses store bought phyllo dough. Most common fillings are apple, cottage cheese, walnut, sour cherry, poppy seed. Hungarian walnut strudel is one of my favorite desserts, you van have it for breakfast with a nice cup of coffee.

What Pastry is Used for Strudel?

If you are an experienced baker, you can make the dough from scratch, or you can just make it using pre-made phyllo dough.To make things simpler and to save time, this version calls for refrigerated or frozen phyllo dough, your walnut strudel will be done in less than an hour.

How to brown butter?

Brown butter (beurre noisette) is a simple one-ingredient sauce,  that’s gone through a sort of caramelization process, it’s made by heating butter until the milk solids brown.  Two things are happening in the process. First, the water in the butter evaporates, second, the butter’s milk solids caramelize, flavoring the butter with their nutty richness and extending the life of the butter. Brown butter adds rich nutty and caramel notes to your baked desserts.

Place the butter in a light-colored heavy-bottomed pan over medium heat. You melt butter slowly until it foams.  You will definitely hear popping sounds while the water in the butter bubbles and evaporates — that is normal. The smell will change, brown butter smells deliciously nutty. The butter will go from brown to burnt quickly, so stay close to the pan when you do this and never stop stirring.

Your walnut strudel will be so much tastier if you spread it with brown butter not just simple melted butter. 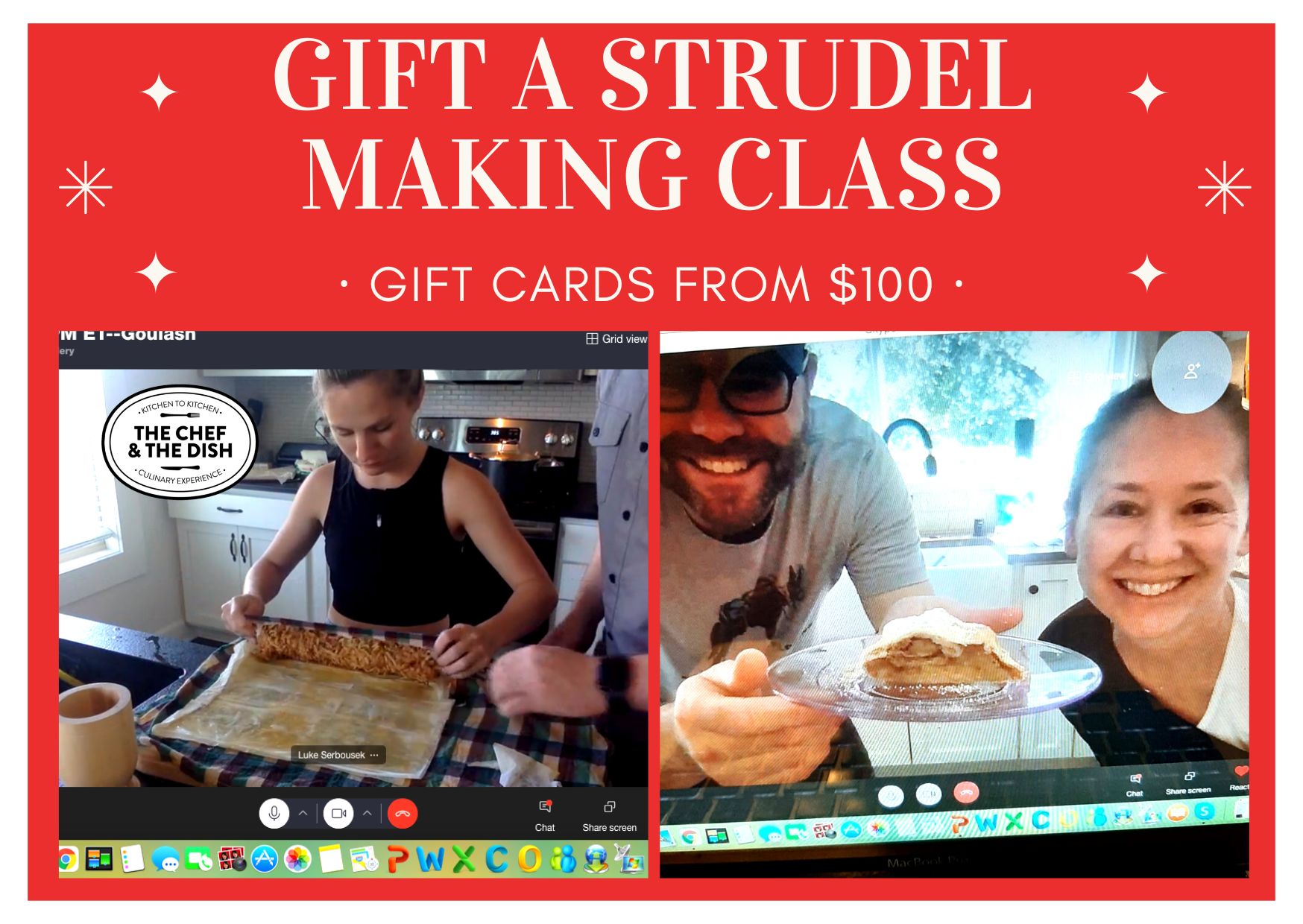 The Chef & The Dish brings me straight into your kitchen for an in-depth and fun Hungarian cooking class.

I teamed up with “THE CHEF & THE DISH” an online kitchen to kitchen cooking experience. We bring together kitchens across the world for a live, private cooking classes via Skype. Master the best, most delicious Hungarian strudel. Book an online, 100% interactive cooking class with me, no flights required. The Cooking Class gift certificates are perfect for creating unique and memorable experiences. Gift a Hungarian strudel class to your loved ones! 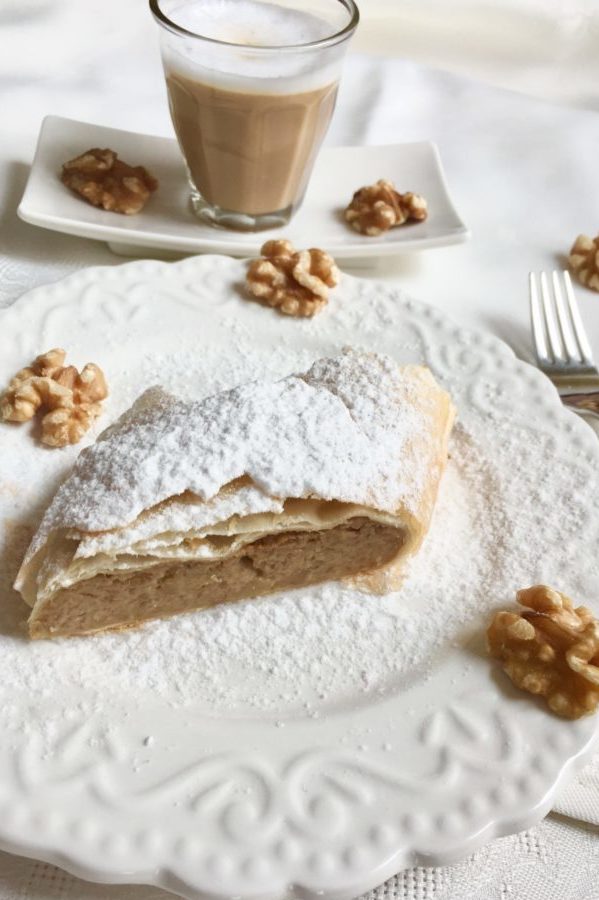 Strudel is a type of layered pastry with a filling that is usually sweet. Most common fillings are apple, cottage cheese, walnut, sour cherry, poppy seed. Hungarian walnut strudel is one of my favorite desserts, you van have it for breakfast with a nice cup of coffee.
Print Recipe Pin Recipe
Total Time 45 mins
Course Dessert
Cuisine Hungarian
Servings 4 people 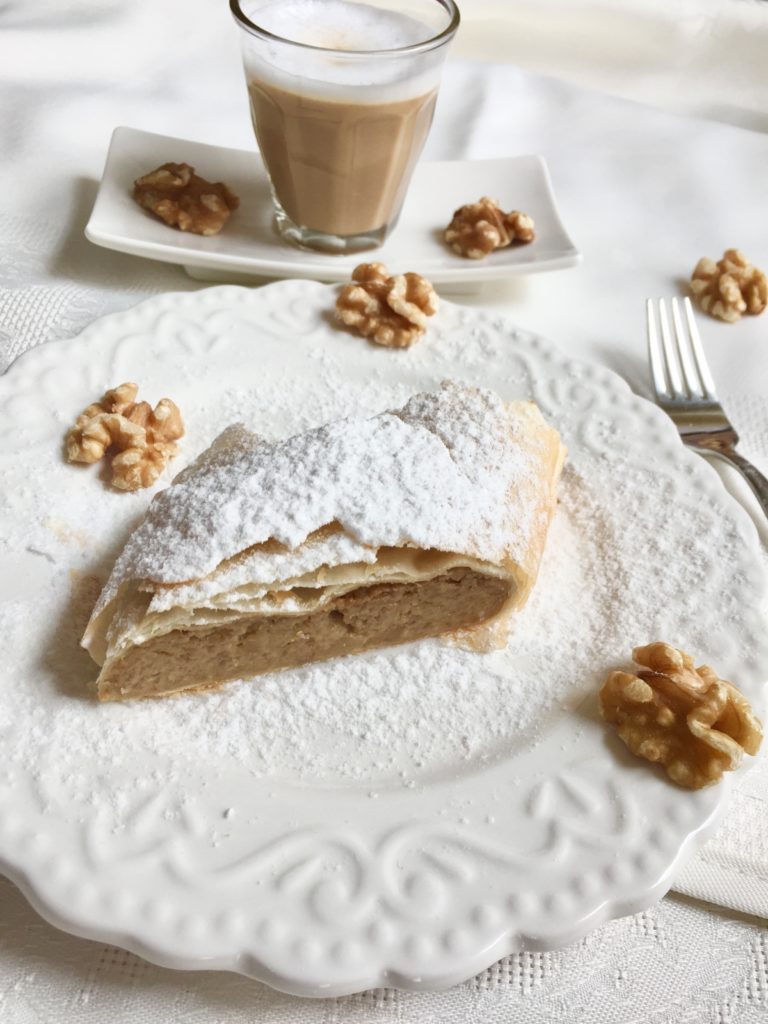